Man, I wonder how quickly I can do this.

Remember when I used to steal time, when I called myself a time thief? That was 3.25 years ago, and somehow time has gotten its stuff back from me. I push my effort into all the little corners and crannies that life gives me lately. I’ve learned that resistance is futile. That reacting with anger is only a way to show the world that one doesn’t understand what their responsibilities are — and it’s a curious change to behold from this side of my face, because it’s happening to me. Instead of snapping, I can nearly feel a physical sensation as my mind stretches out to find its peace with the situation. In retrospect, it’s all small beans.

Of course, the situation could be much more extraordinary than an unexpected change of direction in one’s day. Not everyone can be asked to find their inner Plasticman.

I have long aspired to find that secret superhero within, and I suspect that there has been a conspiratorial push to bring any such people out of the woodwork of society since the dawn of the atomic age. As our world becomes more extraordinary, it feels like there is an undercurrent of longing for extraordinary people to guide us, and to show us how to shine and to have hope. It’s so sad that this is a time when the people of the world are watching this sad contest between two clowns who have no business at the top of the free world, but I would be at a loss to suggest an alternative.

As far as I’m concerned, I’d prefer to go gray at my own pace.

And the frustration continues at many angles, as we’re less than two months out from Halloween and suddenly I’m interested in building a costume from scratch, partly for the sheer love of creation and partly because I think it would be cool to have something to wear to comic store day in the Spring, or Halloweenfest (another comic store holiday,) and heaven forbid, should something like Comic Con ever come to North Dakota, saints preserve us! But it appears that the Internet has little to divulge when it comes to the secrets of Hollywood’s costumers. Mme. Ross is going to teach me to use her sewing machine this weekend, and then we will see what I can do with that.

But wearing a costume means little. Costumes come in all varieties, including pantsuits and silly blonde wigs. You can’t hide what you are so easily, can you?

I have to run now.

This week’s Daily Post challenge is to write a post about a superhero who speaks to you. Of course, I didn’t exactly follow the rules . . . scoundrel that I am.

The current week’s prompt for the Cartoon Craziness Challenge (C³) is “build-a-burger”. I had more than one idea for this one, but here’s the one that I made:

You probably shouldn’t watch this because after a while it looks like Bach is looking right into your soul and mining your thoughts like the NSA on spice melánge. Plus it clocks in at two hours and change, but it does make some nice background music if you leave it up while you do housework or something.

So I find myself embarrassed to say that in the rush and bustle of life, while putting things to the side for later, I managed to file away a Cartoon Craziness Challenge (C³) from the Indecisive Eejit and am just now putting in an entry that could have been in a couple of weeks ago. Today I may get in entries for both Weeks 7 and 8, but I’m not going to make you wait, lest rumors of my disappearance never abate!

The theme of Week 7 is “mythical creatures”,  and while this one is right up my alley I felt compelled to create something new, something never-before-dreamed-of in the entire lexicon of human history . . .

If I have failed, I can hardly be blamed considering “there is nothing new under the Sun” is a common mantra — the thought that you can never think up something new because everything has been thought of or done already. I beg to differ, though, because sometimes we do get something new — heck, sometimes we still find new species of life right here on Earth, and even though (we assume) they’ve been there all along, it’ still new to us . . .

And even if that pessimistic adage were one hundred percent true, that doesn’t take into account anything that isn’t under the Sun — our old friend Sol, that is.

Presented for your inspection: a creature whose origins stem from another place, another world that finds its orbit around, and its aromatically gaseous landscapes below, a different sun. Its appearance is unsettling. The rational mind refuses to accept the jumble of visual information transferred to it by the alien starlight reflecting from the surface of this beast — a life form that can only live out its violently befuddling existence in  . . .

And now for the first thought. Most of my other entries into the C³ have involved a “first thought”: basically, I managed to create the image that came into my head when I read the prompt for the challenge, and this week is no exception, except my first thought was a blast from the past. It’s a piece that I began over a decade ago while working for Erie Industries in Ferndale, Michigan. It takes quite a while to machine out a two-foot diameter, cast iron cylinder block, which is the job I was doing on a honking-big Mazak CNC lathe when I began to draw this dragon.

I intend to finish it some day, and then have it tattooed somewhere on me, and it’s going to be big. Once upon a time I drew a lot of dragons, and was beginning to get quite good at it. In the spirit of mythical creatures, I wanted to share this one because it remains the best I’ve ever drawn at the pinnacle of my practice.

This week, Intrepid Reader, I have been moved to post again for the Cartoon Craziness Challenge, or what I like to think of as C³. The topic for this week is “Memories of a Childhood Vacation”. I sat down last night with one idea, and I ended up drawing another one instead. It’s funny how that happens; it’s as if the plan is fully formed when you set yourself to doing something, and then without warning the task drags you along like a runaway St. Bernard — rolling and flailing at the (formerly) business end of the leash, you’re trying to protect your sensitive bits while trying to get a hold of the little barrel of whiskey tied around its neck, because at this point you figure you’ll either disinfect your wounds with it or you’ll need a stiff drink, or perhaps a bit of both.

So after that ordeal, I get this. 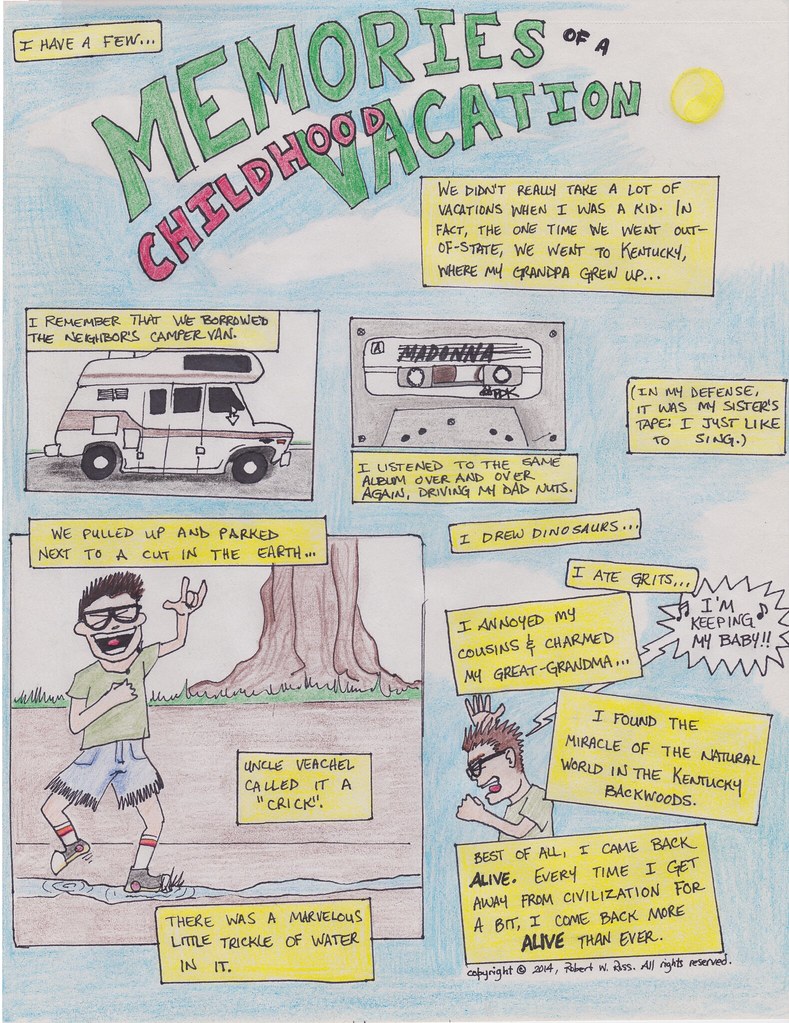 I promised a superhero picture earlier this week, and I have delivered. This is the vision I had when I first read the prompt: 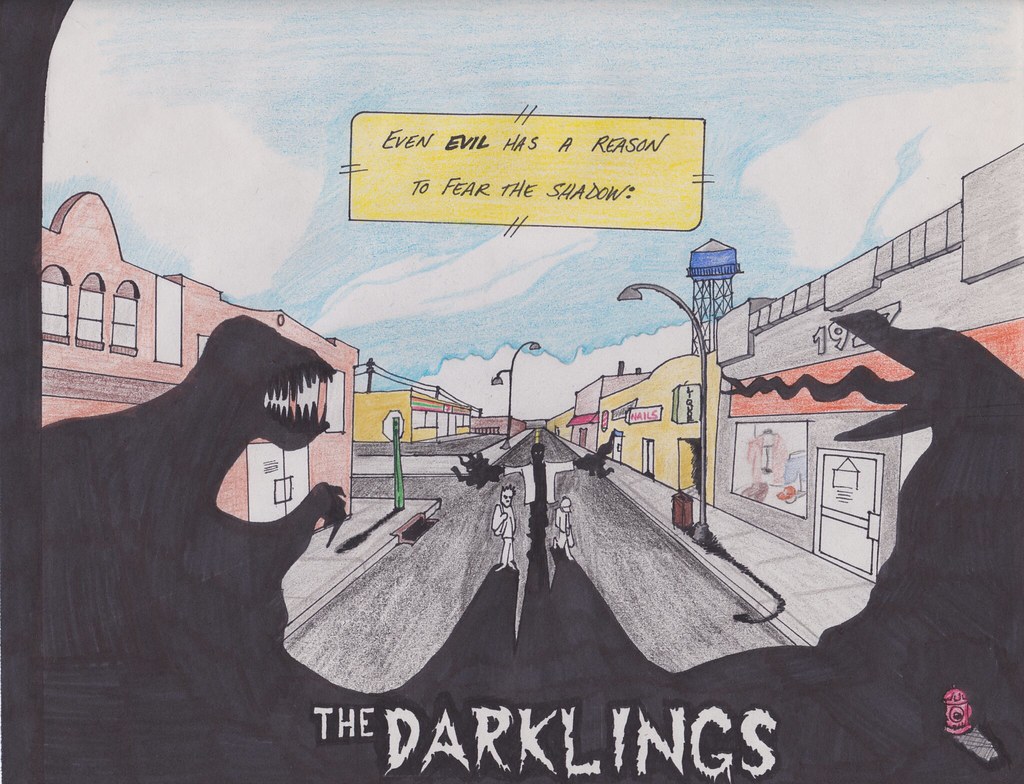 The further I got into this piece, however, the more I realized that it’s not traditional “superhero” material. I did come by this sketch concept I made in our room at Seaside, Oregon: 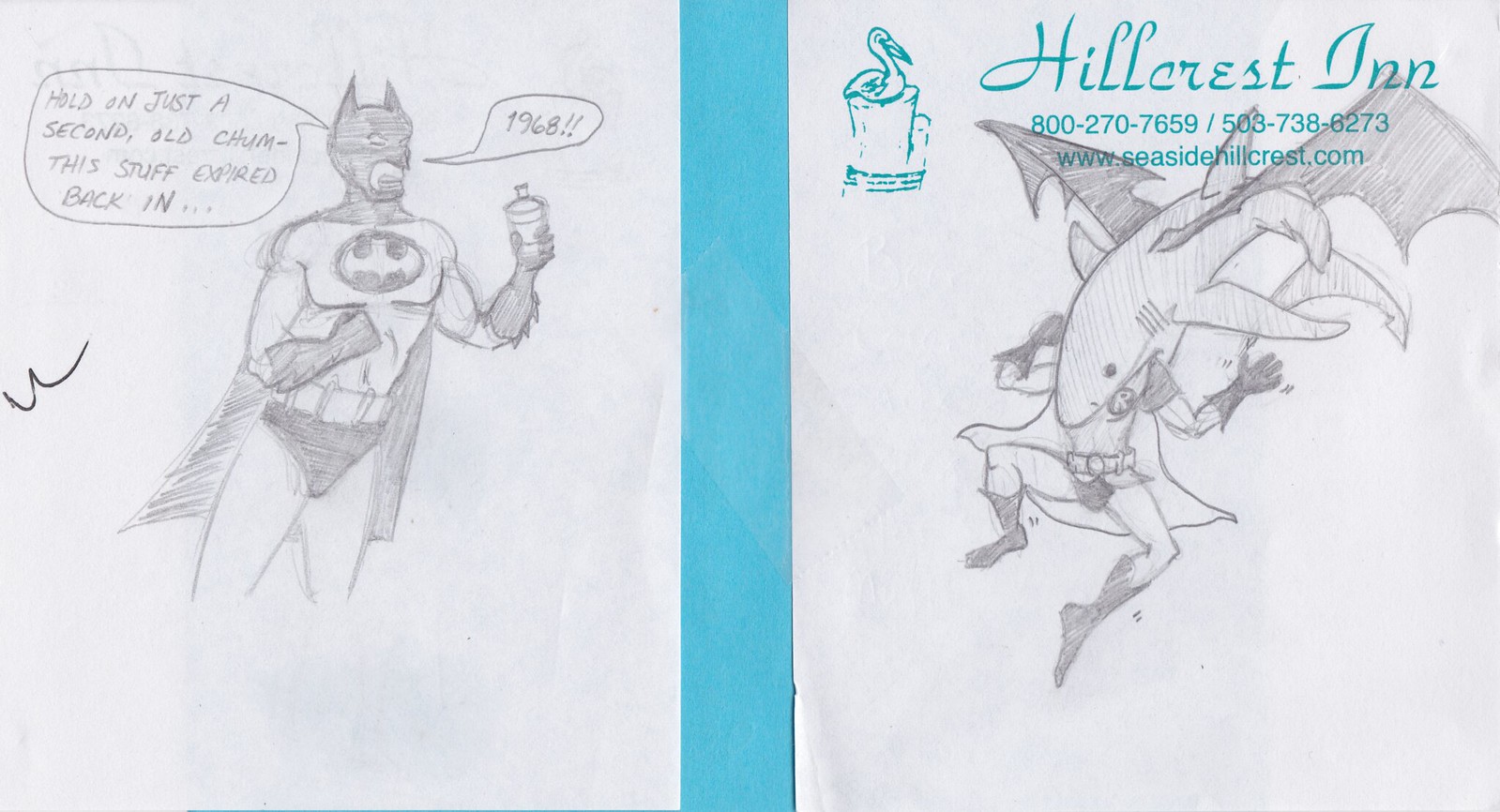 Funny, how I started itching to draw very soon before this challenge began!

I thought that it might be a good thing to share a few of the things that I find around the Internet while I’m being distracted from running and writing in the morning – things that I like, things that I feel like I should share with my readers and that I don’t really know if I could do justice for in just one post. Hence we have the Surf Report: a roundup of things I have to share with all of my wonderful readers.

Yesterday morning I got a surfboard review in my YouTube email and I decided to watch it. Now, I don’t really know Thing1 about surfboards except that they’re boards you surf on, but after this video I realized that:

If you’re interested in learning a little bit about them then watch this:

Last night I read my email newsletter from the Oatmeal, a comic blogger that you may or may not have heard of (it’s likely you have seen some of his stuff around, if nothing else). It was just one epic comic in six parts about why he runs so much. I swear this comic is all about me in someone else’s hilarious words; please enjoy it and check out all six parts by using the next button at the bottom of each part or the supplied navigational index.

Here’s a fond hello back to the good-ol’ days:

Well, it might be a little easier to get some readers now! But from the analog evolution to the digital revolution did we lose something else, like all the time we spend distracted, watching videos, answering emails, listening to the new Vampire Weekend album on Spotify? Possible. Quite possible.

Finally, I would feel remiss if I didn’t at least show these off:

I want to thank my friend Rachel Folk over at All Night Knits for giving me these blog awards, and for being such a wonderful reader. Readers really are the best award a blogger and writer can collect, and I hope to be able to increase my readership as time goes by; to this end I will do my best to bring something interesting to the table every day.

Here are (some of) his people: